Custom Homes: How to Read Your Custom Line Plans 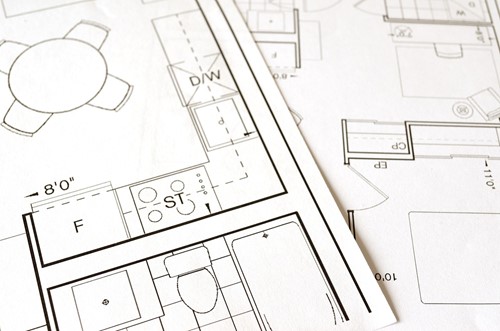 When you look at the plans for your custom home, you might not understand what you’re seeing at first. These plans contain many symbols that can be hard to interpret without architectural knowledge. One of the most common types of symbols that appear on house plans are lines. You might notice several kinds of lines on your house plans, including solid lines, dashed lines, thick lines and thin lines. Learning what these distinct lines mean can help you understand your house plans better.

Solid lines on house plans show visible surfaces or objects, such as windows. Solid single lines on these plans might show cabinet edges, stair edges, window frames or floor edges. These lines indicate edges of different surfaces or objects in your home. You might think of them as boundaries throughout your house. Double solid lines with shading in the middle indicate walls on house plans. If you’re having remodeling or renovating done, you might see new walls shown as double lines with dark gray shading in between, while your current walls will have light gray shading in the middle.

House plans might have arced lines or circular lines to show the direction that doors swing open. This helps ensure doors will be able to fully open without hitting anything. These arced lines are usually shown at the end of rectangles on house plans, which represent doors.

Knowing what each of these lines indicate can make it easier for you to understand what you’re looking at. You can carefully go over your house plans to check for errors or to see if you want to make any modifications or adjustments to them. For example, you might decide that you want to put a window in a room rather than leaving it as a solid wall. You can go over your house plans with your architect or builder to discuss any issues you have or ideas for changes.